Two weeks ago today was the scariest day of my life.  I can't even begin to tell you the emotions I was having in the waiting room as I slowly realized something wasn't going right during the surgery.  Between it taking longer than they anticipated, the nerves in the nurses voice as she updated me, and that darn Mother's intuition, I knew something wasn't right.  As hard as it was to have your child come out of surgery on ECMO and a respirator with his chest still open, I am so thankful for the surgeon being cautious and doing what he thought was the best chance for little Carson.  Thank God, Carson is my little fighter because after only 12 hours his heart was doing its job on its own. A week later he came home with us and was crawling around and playing with his favorite toys. I have included some pictures of him right after surgery.  I wanted to include them because if you didn't believe in miracles before, you might after seeing the progress he has made in just two weeks. Don't worry everything is covered up. 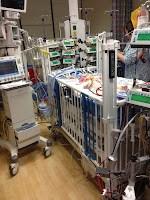 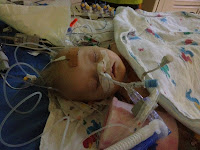 Two weeks later, besides some sleepless nights and a little bit of crankiness from pain, he is pretty much back to his smiley, active self.  One of the hardest things right now is that we can't pick him up under his arms and we have to scoop him up like an infant (a very big infant).  He is not a big fan of being carried that way and is hard to catch as he is crawling away.
Today we went for a follow up with his regular pediatrician.  The pediatrician could not get over how well Carson was doing after all he had been through.  Based on blood work drawn during his pre-op Carson's hemoglobin was low and he is anemic, so he will have to take some iron, to get some of his levels back up.  This is unrelated to the surgery and his number may be different since he had so many transfusions, but the doctor wants to be proactive.  All things considered this is no big deal, but another medicine he is not going to like.  The poor kid has figured out every trick we have for giving meds.
I also wanted to thank everyone for their thoughts, prayers, meals, cards, offers to watch the kids, etc.  I truly believe his recovery is an answered prayer. 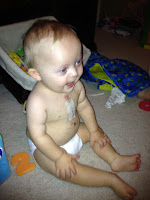 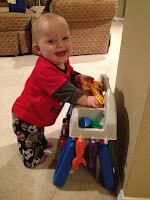 Above are a few pictures of Carson just two weeks after surgery.  He truly is a miracle :)
Posted by Kelli at 5:08 PM